My library loot posts when I feel that I have got some particularly good books from the library tend to be somewhat sporadic and I never manage to get them to tie into the Library Loot blogging event. But anyhow, it's a rainy Sunday and I've just remembered that I've got several good books out which I'm quite looking forward to reading which hopefully I'll be able to tempt myself with this week.  They're all from reservations rather than from random browsing.

The univited guests (Sadie Jones); greatly enjoyed Jones' last two novels, but I believe that this one is quite different, a mystery story in the early twentieth century. I've seen a number of reviews of this one recently.

Pioneer Woman (Ree Drummond); this is an autobiography of a woman who swaps life in LA for life on a ranch. Based on a blog, I have a feeling this could either be really irritating or absolutely fascinating - I hope that it is the latter.

Salvage the bones (Jesmyn Ward); this novel was on many people's projected Orange longlists, and as such interested me. Since some of my favourite books didn't make the Orange longlist, I'm keen to read other people's favourites too.

Battle hymn of the tiger mother (Amy Chua); I read a review of this recently and it sounded fascinating. It's all about the differences in raising Chinese and Western kids and about the cultural differences. 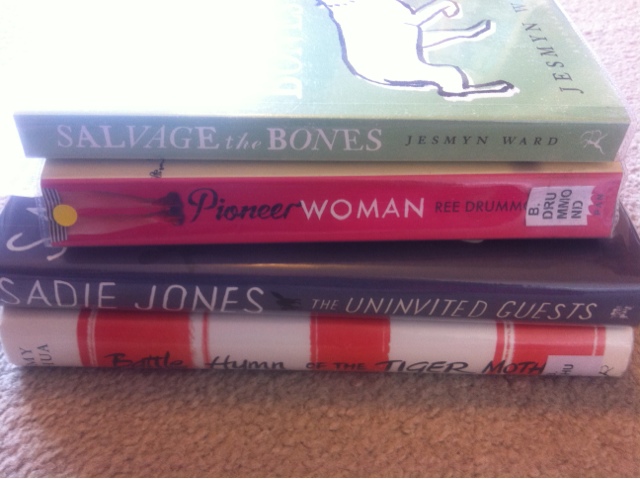