The bear nobody wanted (Ahlberg)

Bernard and I sat down last night after packing some more boxes, and making some packed teas, to read this book which I'd spotted on the way out of the library on Friday after visiting the children's section to pick up Heidi. The title grabbed me instantly, because it would be so sad for a teddy bear not to be wanted, and I used to love the Ahlberg's picture books and poetry (and also, reading children's books is about where I'm at at the moment). This is a full length children's novel, beautifully illustrated in black and white, and also somewhat of a story with a moral; for what grabbed me most about the book was the way that it subverted what I was expecting from the title, a bear on whom I would immediately want to lavish pity and affection. 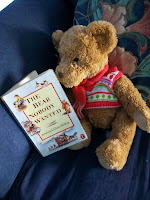 The bear that nobody wanted, started off looking too proud, and thought himself better than the other bears in the factory. And somehow, with a slip of the stitching, and a slightly mishapen mouth and wonky eye this expression was sewn into his face, and came to match his outlook on life, and as a consequence he was then rejected as not being good enough to go and be sold with the other bears. He was rescued from being remade by a cleaner, but he is not considered particularly special by her children, and is snubbed by their other cuddly toys, and is neglected (and even abused). From there, he goes through a series of indifferent owners: taken to paper factory by the rag and bone man, used to clean shoes by the office executive there, chewed by a dog... Mended at a toy hospital, a new eye gives him a slightly better expression, and his life so far is starting to give him some wisdom and humility.

I was captivated by reading this story, although perhaps I felt more sorry for the bear than I should have given his personality at the start, and was desperate to find out what happened to him in the end and whether or not the story would have a happy ending. I hugged Bernard the bear quite tightly last night.
Posted by verity at 18:01