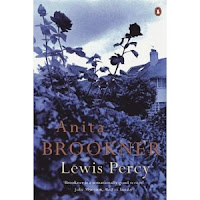 The first of my librarian reads was Lewis Percy by Anita Brookner, which I selected in part because the author was familiar. I went through a bit of an Anita Brookner phase last year, until I started to find her novels a bit samey. But I had had sufficient break to enjoy this one, even if it wasn't exactly a "feel good" read.

The novel tells the story of the character Lewis Percy, an academic, who lives with his mother. We first meet him studying literature in Paris, which seems a promising start to his adult life. But on return home to his mother, and to finishing his thesis, he ends up establishing himself in a lonely, isolated existence, centring on his academic work and based in a library. His mother dies, and I think Lewis starts to feel the importance of having a woman in his life. From this somewhat depressed existence, he meets, and befriends one of the library workers, an agoraphobic girl who works in the library and lives with her mother. He decides to marry her but the marriage, which is happy to start with, soon falters. Lewis again feels lonely, and she starts struggling with being able to go out. They divorce . Lewis by now is working in the library himself; the routine is helpful but it is his nightly visits to his child which keep him going. This wouldn't make a hugely interesting story, but it is obvious that the book is being set up for something to happen - the arrival of another character who will transform his life.

As I said at the beginning, it wasn't a hugely warming read, but as usual, Brookner writes a novel that gives insight into the life of the characters that she describes; a book about people and their lives rather than anything more plot driven. And what of the librarian aspect? I have to confess I was more interested in Lewis' life and what would happen to him that I quite forgot why I was reading it in the first place!

I have my hands on several other librarian-featuring-novels now, so do look out for more posts on this theme, I think I will probably be reading the DE Stevenson, Young Clementina next, in celebration of my first ever visit to Scotland at the weekend.
Posted by verity at 17:00