Some scenes from Arthur Ransome

As I mentioned yesterday, I wanted to share some literary photographs from our holidays. We spent a week in Coniston, in the Lake District. Having only been once to the Lakes before, when we did a bit of a Beatrix Potter tour, it didn't take long for me to decide that we should stay at Coniston, purely on the basis that Arthur Ransome went there and based his Swallows and Amazons around the area.

On our first day we took a boat trip on the lake, the highlight of which was the commentary pointing out landmarks from Swallows and Amazons.

We saw Peel Island or rather "Wild Cat Island", to which we later donned our wetsuits and swam out to... 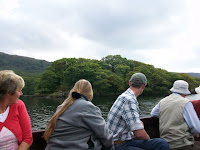 Although we could see elements of Wild Cat Island in it, it was really too small. If you're a big Swallows and Amazon's fan, then you may have read Christina Hardyment's book, Arthur Ransome and Captain Flint's trunk, and she posits that Ransome combined Peel Island with another larger island in his head. I agree with her.

We saw the house that was used as Beckfoot in the film of the book, which I watched when we got home last week. 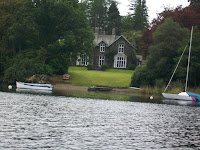 ...and the Swallows and Amazon's boathouse. 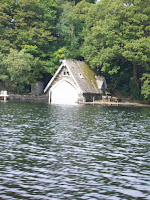 We later drove round to see Holly How, which the boatman had pointed out at the end of the trip and which it transpired we could see from our cottage. 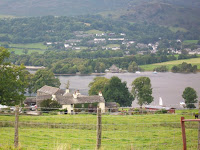 Ransome wasn't the only literary figure associated with Coniston. We also visited the fascinating Brantwell, where the Victorian artist, social idealist, writer and general polymath John Ruskin spent the latter part of his life. It had breathtaking views over the lake: 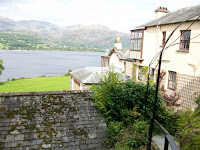 As well as beautiful gardens. Here is my fiance sitting on John Ruskin's seat (I asked him to do a John Ruskin pose, so here he strokes an imaginery beard). 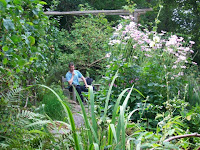 All in all a wonderful break!
Posted by verity at 17:56