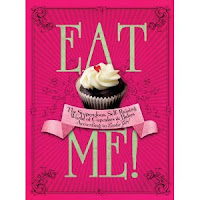 Eat me! is a fantastic collection of cupcakes and cookies which was recommended to me by Joan Hunter Dunn from Flowers and Stripes. When I saw that the Book People had it for only £5, I couldn't resist ordering myself a copy, and what a good buy it has proved to be. The recipes are divided into four seasons - so winter contains bakes for Valentines Day and Christmas, Autumn for Halloween, and so on, as well as based on seasonal ingredients - e.g strawberries in the summer. I don't think I have come across a recipe book where I wanted to make so many of the bakes immediately. Of course, with my baking challenge limits imposed upon me I am restricted in what I can try immediately, but there are actually a number of possibilities. As we're still reasonably close to Christmas, I began by making the Christmas pudding cupcakes with brandy buttercream. A spiced cupcake filled with soaked dates, raisins (should have been sultanas but didn't have any) and currents topped with a buttercream made from butter, icing sugar, ground almonds and brandy. The icing was so moreish! I didn't think I'd have enough to ice all of the cupcakes so initially piped icing just in the centre, but there was plenty left over so I did the little dots around the edge which I think looks quite attractive - only my second time piping icing so I was quite pleased with that. 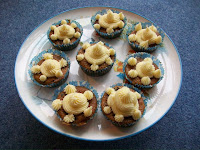