I've got the last two new Bloomsbury Group books to write about today.

Mrs Ames by E.F. Benson is a social comedy, probably a bit in the style of Wodehouse perhaps, although at times it reminded me of E.M Delafield's Provincial lady. The story revolves around a set of characters in the village of Riseborough where social niceties are acutely observed:

"No amount of appreciation would make tinned peaches fresh or turn custard into ice cream," said Mrs Ames, laying down the fork with which she had dallied with the kedgeree...."It is foolish to pretend that a thing is perfect when it is not".

The book tells the story of how Mrs Ames, perhaps the most popular villager, finds her popularity challenged by the incomer Mrs Evans. Mrs Ames' husband and son are also attracted to Mrs Evans, posing a further threat to Mrs Ames position.

I have not read anything by E.F. Benson, although my father is a fan of the Mapp and Lucia series which is what he (I was surprised to learn when reading the author note at the beginning of the volume that Benson was a man as had always assumed that he was female!) is probably most famous for. I have to say that this wasn't my sort of thing, although if you enjoy Wodehouse (which I don't!) and you like books that observe English social life (which actually I do, being a fan of Barbara Pym and the Provincial Lady) then you should definitely give this a go. 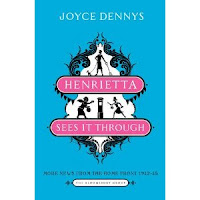 And onto Henrietta sees it through by Joyce Dennys. This is the follow-on to Henrietta's war, which Bloomsbury published last year, and enables us to catch up with Henrietta's exploits in wartime England as told through letters to her childhood friend Robert who is at the front. I found the last book a bit bitty; the letters were originally published as articles for the journal sketch and only brought together in book form in the 1980s. But this time around the bite-sized format suited my current inability to concentrate on books and I quite enjoyed Henrietta's humour alongside the insight into life in wartime England. And there are lovely cartoons illustrating the book throughout.

This passage where Henrietta helps out the orchestra by playing the triangle made me laugh (partly because I had a similarly important part playing the bass drum one year at school...)
"In triangle playing, if you have only three Pings in a whole movement, and each Ping is separated from the next by at least eighty bars, and you aren't very good at reading music anyway, it is extremely difficult to Come In at the Right Time. The conductor was sitting with his head in his hands, apparently weeping, by the time we had gone through the movement twice. After that I threw my music onto the floor and trusted to Womanly Intuition and Memory. After the Double Bass had played three loud zooming notes I Pinged once; when one of the cellos turned round and gave me a Look; I Pinged a second time; and at the bit where little Mrs Simpkins began playing in flats instead of sharps, I Pinged for the third time. This was correct.
The conductor said "Good Triangle"! and was I proud?"

Thank you Bloomsbury for giving me the chance to be among the first to read these books in their latest editions; and I commend them for their choice of books. Fascinated to see what will appear next, and I really hope it includes some more Mrs Harris!
Posted by verity at 08:00